Day preaching under the tree 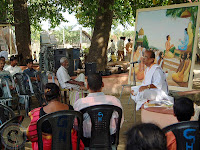 
Prabhu, please tell us of how and who had started this program?
Nanda Krishna: Before I joined this program, the Question & Answer Classes were held only on the main festival days in ISKCON Mayapur, eg. Christmas Day, January 1st, Rasa Purnima, Gaura Purnima, etc. This was first organized by HG Advaita Acarya Prabhu, HG Murarigupta Prabhu and HG Bhakta Janapriya Prabhu to preach to the large number of pilgrims who gathered on these holy days. Bishap Prabhu also helped with this program when no senior devotees were available.
Three years ago, I decided it would be wonderful to preach Krishna Consciousness in this way all throughout the year. Srila Prabhupada said, “When any person comes to Sri Mayapur, he should hear Hari Nama twenty-four hours a day.”
MK: Tell us how you started these programs regularly, like now - three times a week? You said that before it was only on special occasions, right?
NK: It was five or six years ago - Advaita Prabhu was speaking to the people because a large amount of pilgrims gathered, it was very easy to preach to them, what Srila Prabhupada said in Mayapur. Always we saw that people come here to Mayapur from many places, so this is an opportunity to preach to them. I sometimes joined for one hour once or twice a year. But after few years then I started alone.
MK: Did someone suggest to you that you should start?
NK: No, I remember at that time (three years back) I thought that this should be continued, so I did this after Gaura Purnima festival. In the main pandal, in front of the jagya-shalla, there were some chairs, some sitting places, so in the middle of the day I saw that all people are resting there. I started getting microphones, and I got a banner saying ‘questions and answer’.
So, I gave them a question and answer part. There was no program in the temple to help these visitors. Then I asked them, “Do you have any questions?” I gave them paper and pen. “You can write, and I can answer.”
MK: So, it was your initiative to do this. Then how did it develop?
NK: This program is going on every Thursday, Saturday and Sunday from 12:30 noon until 4:30 pm.
Besides the class, many people receive japa-mala so they can chant in their homes daily. 500 to 600 people attend this program daily and they derive great pleasure from chanting the holy names. When large numbers of pilgrims chant the Mahamantra loudly together it has a wonderful effect on everyone’s heart.
Some people remain chanting when they go back to their homes. Because when I am preaching, I express o them that this is for everyday, so you should chant every day. Then some young people - one, two, three, throughout the year, they communicated. After ‘question and answer’ classes, some were so much impressed that when they got back in their home, they brought their japa-mala, and chanting. They decided to take shelter in Mayapur.
MK: They come on occasion?
NK: Yes, they come. One of the managers of steel in India - he came with his wife during the festival, and he was so much impressed that he came in my house, we had personal relations and then sometimes he would come. Now he has become vegetarian and is regularly chanting every day. He is manager, but he wanted to take shelter of chanting. He’s from Calcutta.
MK: Where all these chairs came from?
NK: We had no pandal – just a tree, under the tree. During the Gaura Purnima Festival for a few days, the pandal remained -for a few days, one week, two weeks. At that time, in the middle of the day, there was no program in the temple so people suggested that I take this opportunity. And after that festival was over that year, some chairs I collected from Bhakti Purushottama Swami. I purchased 20 chairs. 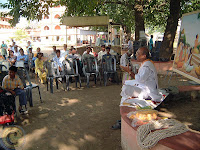 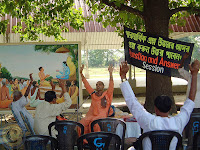 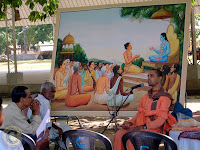