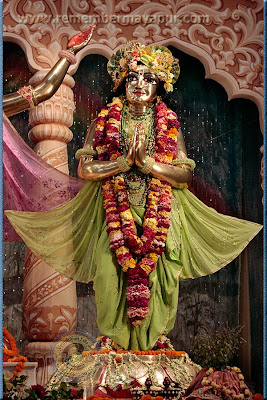 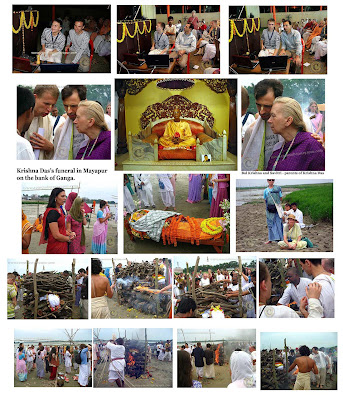 The day before Gaura Purnima this year we have lost one of very talented and prominent gurukulie boy, Krishna Das. He was born in Moscow to Bal Krishna Prabhu and Savitri Mataji.

What happened?
Boys were playing in the Ganga, on a boat – diving, swimming, playing.
Krishna Das was also prompted to jump off the boat by his friends. He was a good swimmer, but somehow when he did jump in the water this time he got dragged in by the Ganga...well, there are more details of how it happened…, but in this article we are simply informing vaishnava community of the fact that we have lost a very valuable young member of our society, full of potential to preach effectively and to attract people to Krishna Consciousness through his art and personality.
This is very grievous loss for our society.

Ever since I knew Krishna Das (as a baby) I have been always noticing how much spiritually inclined this person is. He was very Krishna-conscious baby, then child and when he had grown up into a young man his personality really shined among his friends.

He had made several movies and one of them (about Anapa festival) was presented at ITV Film Festival in Mayapur and won one of the prises. His last film called Kuli-Mela (about gurukulie reunion in Russia).

I very much feel the pain his mother is going through, knowing her personally… Krishna Das was her only child, she had him late and was bringing him up with unlimited motherly LOVE and care, he was her pressures treasure.

Of cause we are not in control of the destiny, but we certainly could pay better attention to each other’s existence and endeavours in Krishna Consciousness.

We all have no doubt that Krishna Das is in good spiritual care, whatever destination he has gone on to. One who dies in Mayapur is certainly will get attention of Srila Prabhupada and Lord Chaitanya.

It is us, who stay back to live our lives, we have to think more carefully how we handle the priceless vaishnava association we have been given by couseless mercy of Srila Prabhupada.
Every vaisnava going out of our life – is the loss that can’t be measured… and if we really feel that way we would try to take better care not to loose anyone unnecessary or “accidentally”, because accidentally means wastefully…- There would be lot less accidents if we would care to protect each other.

At the funeral Mother Savitri said that she feel that all gurukulies are her children and offered her help, association and motherly love to all friends of Krishna Dasa and all gurukulies.
Hare Krishna. 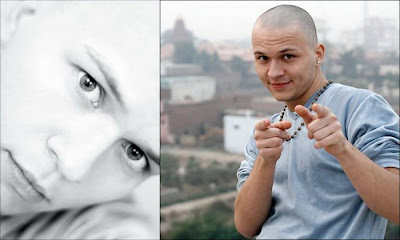 Krishna Das made this photo, this is his favourite photo of Pancha-tattva in Mayapur: 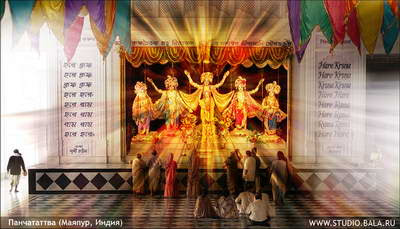 this is some video footage of Krishna Dasa's funeral and cremation: 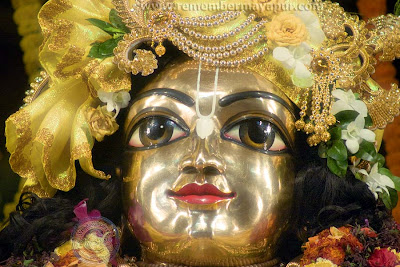 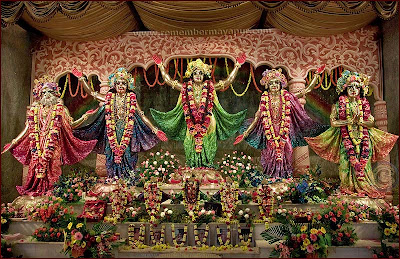 Adhivas is a welcome ceremony, where is welcomed person is shown various auspicious items and mantras are chanted. In the evening before Gaura Purnima devotees welcomed the event evening before with kirtan.

Parikrama on the road:


Parikrama talks at Belpukur, Sachi-mata birth place. Jayapataka Swami, Gopal Krishna Goswami, Kavichandra Swami, Rajendranandana Prabhu, Surabhi Mataji spoke of the place and also emphasised the importance of reducing(stopping) using plastic bags and glases in the Dham. Apparently there is a big effort being made by Indian goverment to abandon plastic, especially most common and contarminating item - plastic carry-bags.

Laxmipriya is the name of our new Mayapur elephant. She is 6 years old child (elephants have same life-span as humans). She arrived toMayapur on 7 March 2008 and lives in the forest area near Taranpur, where devotees built a shed for her. We also expect a second baby-elephant to arrive in two months time (her name is Vishnupriya) and she is 3 years old. 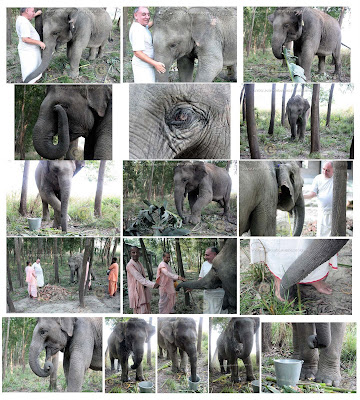 So far Laxmipriya have not been officialy introduced to devotees, although many went to see her in the forest. She will be introduced in few days time after parikrama.
Posted by Padmalocan Das (ACBSP-1971) 4 comments:

On 5-th of March GBC concluded their meetings with Deity report. 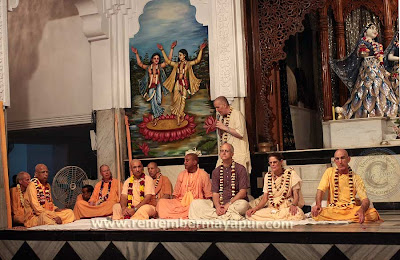