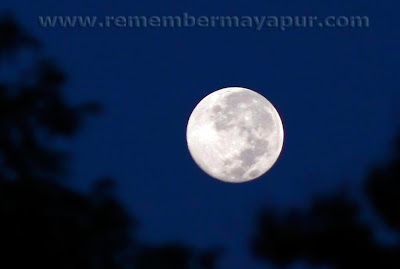 Kartik begins after Sharad Purnima (full moon) - this is the Maha-Rasa dance night and the moon is largest and most beautiful full moon of a year. 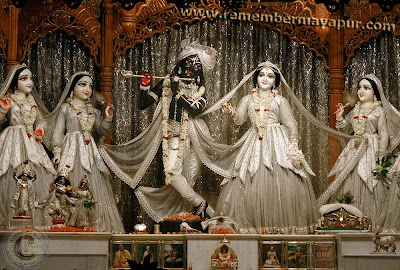 Community devotees in Mayapur are gathered to assist Nirguna Prabhu to go through expirience of leaving this body. Devotees chant Hare Krishna kirtan for few hours every day, starting at 4 pm. 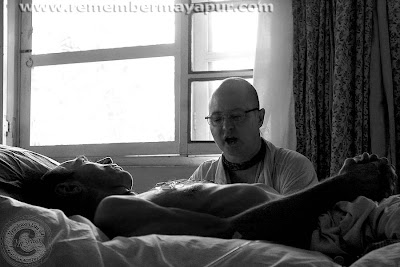 Nirguna Prabhu is preparing to leave his body in Mayapur

This video features Nirguna Prabhu leaving his body in the Holy abode of Mayapur Dhama, surrounded by helpful devotees of Krishna, who are trying to accommodate his needs – both medical and especially spiritual.
Nirguna has Posterior Medistinal Spindle Cell Sarcoma (a form of cancer).
In this short video, Bhakti Vishrambha Madhava Swami is reading pastimes of Lord Sri Chaitanya to Nirguna Prabhu.

Devotees help each other at the moment of death to remember Krishna and leave body in a focused state of mind – focused on the real goal of human life – attaining Krishna.
Posted by Padmalocan Das (ACBSP-1971) No comments:

You can see full photo coverage by clicking HERE. 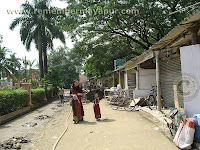 Flood is finished.
Now the huge job of cleaning up begins - gardens are devastated, fanses are smashed down... all ground floor rooms are full of mud.

Darshan and worship during flood 2007, Mayapur

This video is showing devotees taking darsan of Rahha-Krishna(Madhava) and Pancha-tattva in ISKCON Mayapur temple - despite water level being very high.
Also devotees worshiping in their rooms in Youth Forum building, being cut off from the temple by flood waters.

this video is of a boat ride through flooded Mayapur compound:

Flood in Mayapur goes on and on and on.... 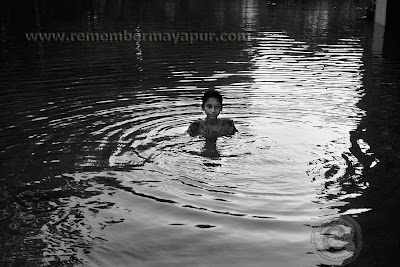 Flood waters slowly started to go down today.
We are stuck in Youth Forum building, near ISKCON Goshala and our health is not so good.
We have been offered to relocate to the Lotus Building for 100 Rupees per day and prasad for another 60 Rupees, but we can't afford this extra-expence in our life, as we live and mentain our service from donations and right now our equipment (main camera + 2 computers) badly need repair/replacement.

So, we are not getting to the main temple area, thus all the latest flood pics/videos and updates are from Goshala side.
Although, Prabhu got to the central area in very beginning of the flood and took some video clips and photos, and today I have managed to get to the temple via boat ride offered by kind devotees.

Even when it is very small amount of water - these devotees have to leave their houses, because this area is probably lowest lying place in ISKCON compound and water covers their floors even when everywhere else is not flooded... what to speak of times like now... 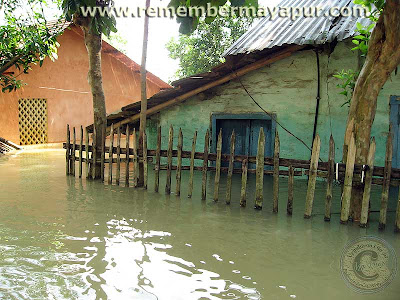 They have to move into higher buildings, where they have to meet extra expense of paying for the rooms. For prasad, they either have to pay and get it at central area if they can get there or else arrange whatever they can themselves.
After water is gone they would be asked to leave as soon as possible, even though their mud floors will take some time to dry yet and they will have to renovate their houses again this year - another flood, another extra expense in life.

These devotees have same type of houses as most poor people outside in this area. My maid-servant lives in a similar house.
People I am describing here are not hired workers, but full time initiated ISKCON devotees.
These devotees have been serving in ISKCON Mayapur for 15/20+ years, one of them is cake-&-pizza-cook, Kamaka Das with his large family. Others serve in Srila Prabhupada Samadhi, Mayapur laundry, Gada kitchen, Big kitchen, Agricultural department, etc...

I know that in the other (most known) Grihastha area devotees are facing lots of difficulties too. We can't get there right now to photograph, but will later, when water go down some more.

The photos below - Goshala housing area is flooded: 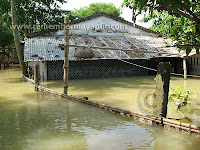 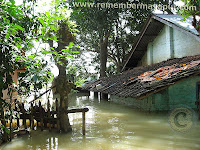 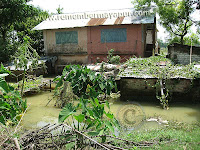 The people are suffering in the flood!...
I mean suffering...
They have no food no more house and the government is not helping also. If ISKCON does not help those people and cattle, they are really bad off.
I had to go through gushing water with my cows to get to Jagannath Mandir. The second time my bullock Balaram took the cart he had to walk through neck deep water with heavy current to pull the cart that was filled with rice straw that will last them for 3-4 days. Now they are so exhausted that 3 of them are very sick. They are under some trees with no shelter from the
rain, yesterday one Village cow died near Jagannath Mandir from exhaustion due to having to walk through deep gushing water.