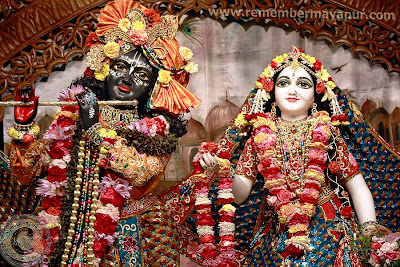 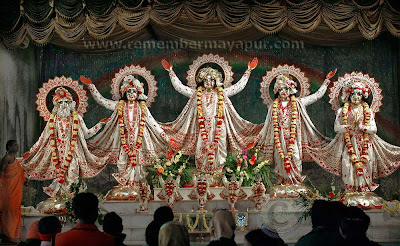 BHAGAVATA-PRAVESA, an extension course in Mayapura

AN INTRODUCTION TO THE BHAGAVATA PHILOSOPHY

The Srimad-Bhagavata Vidyapitham began operations in fall, 2005. The school is directed by BBT's senior Sanskrit editor, translator and commentator, His Grace Gopiparanadhana Prabhu. The main purposes of the school are to train Sanskrit translators and editors for the BBT, promote deep study of Srimad-Bhagavatam, help devotees learn to function as brahmanas in ISKCON, and for the accomplishment of these main purposes teach proficiency in reading and speaking Sanskrit. In its initial phase of operations, the school offers a three-year Bhagavata- sastri study program, the students of which study Srila Prabhupada's purports to the Srimad-Bhagavatam, learn the Sanskrit grammar of Srila Jiva Gosvami and undergo training to read the Sanskrit commentaries on Srimad-Bhagavatam by our previous acaryas. From July, 2007 Srila Jiva Gosvami's Sat-sandarbha has been taught by the director of the Vidyapitham as a part of this study program.

The Vidyapitham also offers an extension course titled Bhagavata-pravesa in Sri Mayapura-dhama. Graduates of this program will be well prepared for the three-year Bhagavata-sastri program in Govardhana, and will be better equipped for knowledgeable preaching of the Bhagavad-gita. This program in Mayapura is also open to those who do not plan to study at the Vidyapitham in Govardhana. This program began on 1 November, 2005.

The Bhagavata-pravesa program includes an intensive study of the Bhagavad-gita, the first three chapters of the First Canto of the Srimad-Bhagavatam and an introduction to Sanskrit.

Classes on the Bhagavad-gita will include a study of the commentaries on the Bhagavad-gita by Srila Prabhupada, Srila Bhaktivinoda Thakura, Srila Baladeva Vidyabhusana, and Srila Visvanatha Cakravarti Thakura. The students will also be taught the nine essential teachings of Lord Caitanya (nava-prameya) as presented by Srila Baladeva Vidyabhusana and Srila Bhaktivinoda Thakura. Students will then enter the Srimad-Bhagavatam by studying its first three chapters of the First Canto, which summarize the teachings of the Bhagavatam.

Students will be taught elementary Sanskrit grammar and vocabulary in order to understand the text of the Bhagavad-gita. They will also be introduced to the Hari-namamrita system of Sanskrit grammar formulated by Srila Jiva Gosvami.
The program is conducted in English.
The course runs for 8-1/2 months, beginning on 1 June 2008 and ending by 15 February 2009, with a two week break in between.


Group photo at the entrance of the Youth Forum Building, where the classes are being conducted. Sitting in the first line are the teachers for the next academic session (2008-09).
from right to left: Vidvan Gauranga dasa, Gurusevananda dasa and Racitambara devi dasi 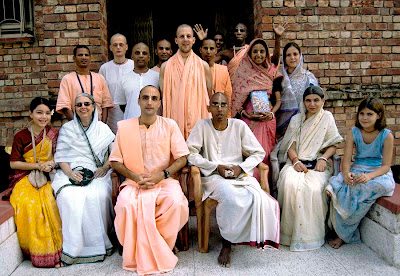 The classes are open to both men and women. Those who want to be admitted as students should be chanting Hare Krishna, following the four regulative principles and seriously interested in this study program. They can apply and we will consider their admission individually.

As per ISKCON Mayapura's bylaws, single men or women who are coming to reside in Mayapura for more than six months are required to arrange for some ISKCON Mayapura resident in good standing to become his or her guardian.

There is no tuition fee for the course. However, students have to arrange for all other expenses, including their travel to and from Mayapura, visas, accommodation and prasada in Mayapura.

In order to facilitate devotees who would like to come to Mayapura to take advantage of our classes, but who are unable to provide for their own prasada and accommodation, ISKCON Mayapura offers two serve-and-study schemes:

1. One year serve-and-study scheme for devotees who want to study the Bhagavad-gita:
Devotees can enrol in the Shastra class as students from 1 June 2008 to 15 February 2009. They will have to attend the morning temple program and render five hours of practical devotional service everyday for one year, from 1 June 2008 to 31 May 2009, in and under ISKCON Mayapura. ISKCON Mayapura will provide such students with prasada and accommodation.

2. Two year serve-and-study scheme for devotees who want to study the Bhagavad-gita and Sanskrit:
Devotees can enrol in the Shastra class as students from 1 June 2008 to 15 February 2009, and enrol in the Sanskrit classes from 1 June 2009 to 15 February 2010. They will have to attend the morning temple program and render five hours of practical devotional service everyday for two years, from 1 June 2008 till 31 May 2010, in and under ISKCON Mayapura. ISKCON Mayapura will provide such students with prasada and accommodation.

These are video clip of Jagannath-katha given by Jananivasa Prabhu, in Mayapur on the auspisious day of Odana-shasti, the first day of winter, at Jagannath Mandir. Prabhu is telling story of how Jaganntha-Baladeva-Subhadra deities came to Navadvipa Dhama (part 1) and how They came to ISKCON (part 2).
Deities of Jagannath-Baladeva-Subhadra Devi were offered starched cloth - this is a few hundreed year tradition to offer starched clothes to the deities on this day.

Harinam Express is specially made riksaw with double set of pedals and bus-typeof sits.It was made to accomodate children and elder people who wish to join roaming kirtan moving throughout Mayapur grounds.

Vayasaki Prabhu was leading kirtan at the openning, on Govardhan-puja day:

Then Shastra Prabhu, the leader and driving force of this Harinam program was leading kirtan:

This video shows devotees worshipping in the temple during sacret Kartik month. 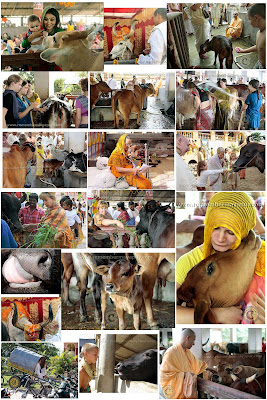 Padmalochan Das is giving talk about importance of cow-protection in human society as well as telling stories of Krishna's pastimes with the cows:

Radhanatha Swami's speach on the ocasion of Gopastami celebration in ISKCON Mayapur Goshala.Maharaj talks about importance of cows, protecting the cows and tells a pastime of Srila Prabhupada with a cow:

Jananivasa Prabhu narates story of how Krishna took His cows out to the pastures for the first time: