Here you can see video clip of a boat ride across Ganga-Jalangi sangam to Navadvipa town.

Now is monson season going on and rivers are swelled with lots of water plants colonies floating down stream.

Also big news is that W.Bengal goverment is puting in place fary landing placies (as you see in the video) all along Ganga banks, when construction in all the planed places is compleat the fary from Kolkata will be going regurlary stopping at Navadvipa and Mayapur side! as well as Swarup Ghanj.
So,there will be another type of transportation available to go to Kolkata city, hopefully soon - Ganga way. 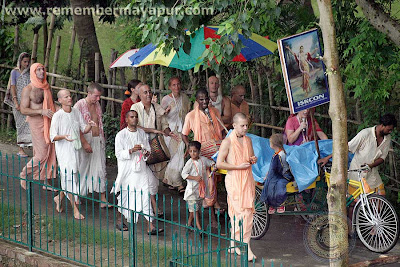 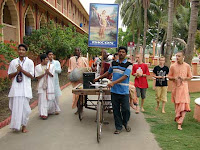 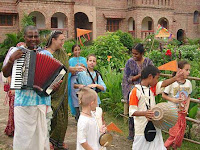 One and half years ago, Shastra dasa from Ghana, West Africa came to settle in Mayapur with his family. He is a disciple of HH Bhakti –Tirtha Swami, and he has 27 years of experience as one of the pioneering leaders in Africa heading Food For Life, Harinam parties, Temples and School projects.
Shastra dasa started performing the Harinama Sankirtan in Navadvipa alone riding on a bicycle rikshaw, after a few months, Madana Mohana Prabhu from Canada joined him. They purchased their own flat rikshaw and sound equipment and started going round Navadvipa, Svarup Ganj, Mahesh Ganj, Rajapur and other areas. Then they started adding small packets of dried Prasadam, and then expanded into adding the traditional kichari FFL Prasadam as manpower increased. Many visiting devotees accompany the party and all agree that this is a wonderful program that should be expanded here in Mayapur. It also creates good relations between the temple and villagers. 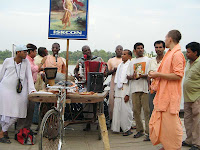 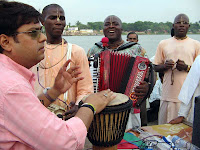 A daily Harinam Sankirtan Party for Sri Dhama Mayapur was officially inaugurated by Mayapur Administrative Council and HH Bhakti Purusottama Swami, Co –Director of Mayapur Projects, in April 2007 and named “Nagara Sankirtan Department” and Shastra Dasa was to head the department.
“Nagara Sankirtan” (glorification of the Lord in the towns and villages) was the official name given by Sri Krishna Caitanya Mahaprabhu himself while he was on the planet 513 years ago to inaugurate the street chanting with musical instruments – though this is commonly known in the west as “harinam sankirtan.” 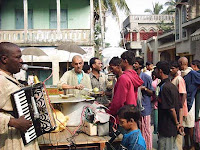 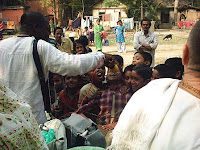 "It is the desire of Srila Prabhupada to have a regular Harinam (Nagara Sankirtan) party going round on daily basis around the nine Islands of Navadvipa and ISKCON Campus.
He wants "Hari haraye namah Krsna Yadavaya namah, Gopal Govinda Rama Sri-Madhusudana" sung along with the Hare Krishna mantra. Though not documented but we heard Srila Prabhupada mentioned that one in his conversations about his vision for Mayapur in Sri Dhama Mayapur…
Whenever I hear the Harinam (Nagara) sankirtan party pass by or stop in front of the Pancha Tattva altar extention vibrating and chanting the holy names, I feel great joy in my heart because one of Srila Prabhupada's desires and visions for Sridham Mayapur is fulfilled......." Pankajanghri Prabhu.

HH Bhakti Purusottama Swami recently sponsored new equipment and instruments for the party. The newly added African djembe drum and the electronic mrdanga (Amplifier) set a new dimension of melodious and irresistible dancing atmosphere in Mayapur. You need to watch it yourself on Sunday when the party finally settles in front of the RadhaMadhava temple, chanting while the pilgrims are taking prasadam offered by the FFL department, to understand what I am hitting at...You will see both old and young dancing in ecstasy with their hands raised and stretched high into the sky sweating profusely, full of smiles, non-stop for hours until the Sandhya arati time when the Nagara sankirtan party members leave to their ashrams..

Last week a Russian devotee who is a nice musician came all the way
from Russia to join the Nagara Sankirtan Department; he can play harmonium
and other instruments. Another English devotee from Cape Town is here to
join the NS dept too.. Room number 7 at the Brahmacari Ashram is donated for
Free to the NS dept and the members of NS are given Prasadam free of charge.

We do FFL twice a week and hope to get sponsorship that will enable us include the FFL along harinam anytime we go out. It is a wonderful opportunity to please Srila Prabhupada and serve the Holy Dhama by sponsoring a village FFL program as they work closely with the Mayapur Food For Life project under the Bhisma Department headed by Sankarsan Nitai Prabhu (General Manager) and his assistant Sundara Govinda Prabhu. 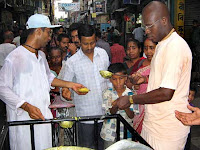 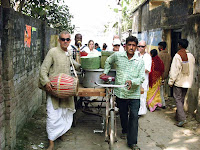 The party goes out six times a week and a new specially designed Rikshaw to be used during the rainy season is being manufactured, to enable us to even go out in the rain without the instruments getting damaged.

By the mercy of Srila Prabhupada, we have started the boat harinam programme from village to village along the bank of Ganga It is an exciting experience and maybe we can write about that later.....
"In the age of Kali, intelligent persons perform congregational chanting to worship the incarnation of Godhead who constantly sings the names of Krishna. Although His complexion is not blackish, He is Krishna Himself. He is accompanied by His associates, servants, weapons and confidential companions." Srimad-Bhagavatam 11.5.32 and 36
Srila Prabhupada built this movement in America on Harinam. Rejuvenate your spiritual life by going back to the root...Harinam Sankirtan.
Join now or support the Harinam party.

The Lord ordered all the citizens of Mayapur-Navadvipa to chant the Hare Krishna mantra, and in each and every home they began performing harinam-sankirtana regularly. (Caitanya Caritamrita, Adi-Lila 17.122)

Everyone should be given the chance to take prasada and thus be induced to chant the holy names of Krishna and also dance in ecstasy” CC Antya lila 1. 32pp.

Our temples should be the media for feeding the poor with food and spiritual knowledge….Srila Prabhupada

Thank you for your kind mercy. 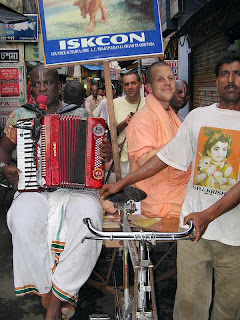 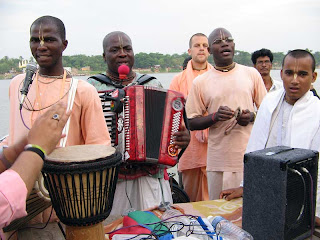