The making of Ramayana play

The making of the Ramayana Drama and to present it as best as possible for the devotees was very hard work.

It all started when Bhakti Marg Swami arrived from Canada. I had no idea he would be asking us, the youth to be in his drama. I heard that he was going to recruit the youth at five, one evening. Well, unfortunately that didn't work out. At least for some people. The ashram boys weren't allowed to act since their exams were coming up and they really needed to study. I admit I had a lot of studying to do as well. So, I figured "I'll probably not go". I had to get good results in these exams. I had to.

Well, it turned out that I met Maharaj that evening and it was decided I'll be a rakshasa. I was warned it was a very demanding role. All the worse for my studying. However, why should I miss out on the fun. I mean, I guess I wouldn't have studied a lot, anyways, if I hadn't been in the drama.

So next morning at seven our first practice. As I arrived I sighed in relief. At least I wasn't the only one there. Only five actors were there and Maharaj, who was always ready, was directing them. We practiced the first scene which involved Sita(Radhika) and Rama(Joshveer). I didn't have much to do but sit there. This gave me the feeling I was going to have an easy time.

A few days later, at seven in the evening, the auditorium contained at least 30 people and I was practicing one of my scenes, for at least-the tenth time. It was fun though. Maharaj would come in every few minutes and perfect our moves.

"It would be better if you go in a circle and dance", his holiness would say," you are too spread out."
So we practiced our "circle dance" and perfected our palace scene. 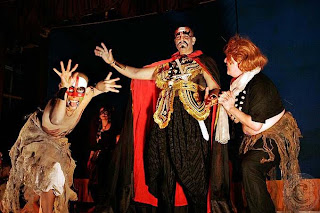 A week later, we finally came to our last scene. It involved everyone. I came in as a rakshasha as usual and I was told to start piercing the air with my spear. So I did that. It wasn't very hard. It was pretty relaxed compared to our wild dance scene. After a few practices, Maharaj called me over and asked me if I could be Indrajit. He pointed out that the actor, who was supposed to be Indrajit were not on time or didn't come. (Maharaj had at least three people try out for the part of Indrajit) I agreed. That meant I didn't have to do the fire scene which involved a bunch of rakshashas and rakshasis, screaming and running. So Maharaj took me on stage and we practiced my new role as Indrajit. I basically had to go around acting like I ruled the world. It was fun, and easy.

Drama day. (Sorry that I didn't say what happened in between, if I had to talk about everything then it would take up the whole Mayapur Katha) Tension sparkled in the air behind the main stage. I had my face and my body painted with black, red and yellow. Everyone was rushing to get their make-up on. It was crazy. Then came seven o'clock. The drama was starting. I was in the first scene. Everyone was tense and ready. However, as I jumped on stage as a forest rakshasha, something miraculous happened. As I looked over the audience, I suddenly wasn't afraid. I was excited. I jumped around as high as I could and so did everyone else when they needed to. Jatayu, the Rakshashas, and the monkeys.

The drama went well. At least I hope it did.