Roaming kirtan in midst of flood in Mayapur

Shastra Prabhu's enthusiastic kirtan is reaching all over the Mayapur area. The kirtan group of few devotees moves about on a boat and because Mayapur is one continues water surface now, sound of the kirtan bounces off the water and spreads far and wide around the whole area - the sound of kirtan seems all-pervading! The kirtan boat came to Goshala side yesterday, please see the video clip: 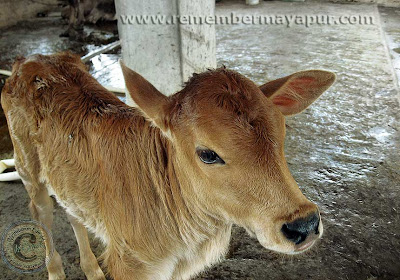 The devotees woke up for the second day in the middle of the Ganga.
The water has not risen in the last three hours and mongala aratic went on in the temple as usual, although there were less devotees present than usual.
The main problem is fresh vegies and fruits, although milk is still being delivered from our Goshala. Medical center, supply stores and Govindas have been relocated in the Chakra Bld.
There is no rain an the power is on although in some parts of the grihasta area the pumps had to be removed. There is no lack of drinking water.
A cow was born in our Goshala as the Ganga rushed all around, the calf is doing fine.
It is possible to travel from Kolkatta to Mayapur although the vehicles have to stop about two km away from were one has to take a boat - if you have a lot of luggage it will not be easy.
Devotees led by Shastra prabhu were moving around by boat having kirtan yesterday. 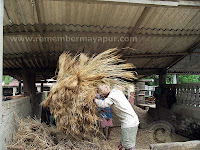 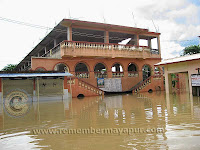 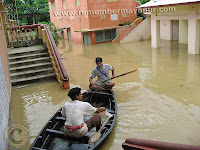 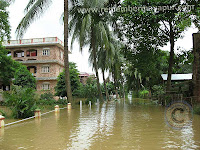 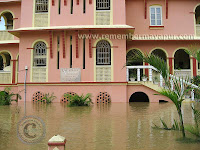 The devotees woke up this morning in the middle of the Ganga. The rising of the Ganga has continued, but slowed down over night about 1 inch every two hours. The water in the temple room is about 4 feet and ranging from 3 to 7 feet at different places in the ISKCON compound. The power has stayed on all night and there has been no rain over night. The gates of the dam have been closed and if there is no more heavy rain then the Ganga should stop rising and start to reseed in the next 24 hours.
I was in the Goshala this morning and the cows seem to be happy and they are well above the water. 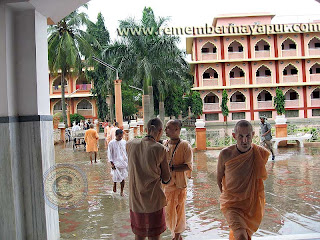 At 4am the Ganga started to rush into our ISKCON compound in the last hour the water has risen 3 inches and it is speeding up. At the present rate Ganga is going to enter the temple in time for darsan aratic.

Yesterday almost everything was lifted from ground level and devotees are struggling to move from those houses which are on the ground level. 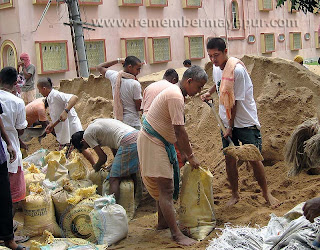 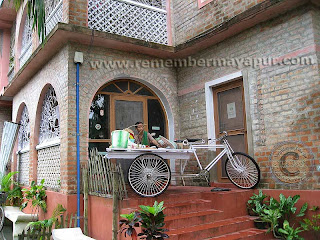 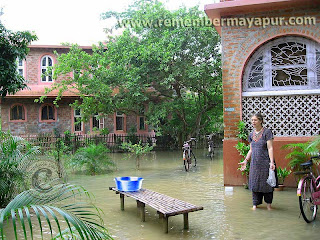 This type of worship of Vamana Deva was introduced by Srila Prabhupada Himself, He had instructed Jananivasa Prabhu to select a small boy, around 4-5-6 years old to take the part of Vamana.
Then the whole worship is performed - as usual when we worship Vishnu tattva.
The boy is concidered to be Vamana Deva and worshipped as such.

This is how Srila Prabhupada wanted this ocasion to be celebrated here in Mayapur. I really don't know if this is apply to other places or not.

If you have more questions regarding this, write to our head-pujari, Pankajanghri Prabhu
Posted by Padmalocan Das (ACBSP-1971) No comments:

Madhumati Mataji is in-charge of garland making for the deities. Her department has 20 permanent ladies making garlands and every day between 6 am and 7 am they producing 100 beautiful garlands made from freshly picked flowers.

Flowers are all coming from Mayapur fields and flower gardens, they picked very early in the morning morning,then brought to the temple, behind Srila Prabhupada's vyasaana by 6 am, where matajis making them into garlands. 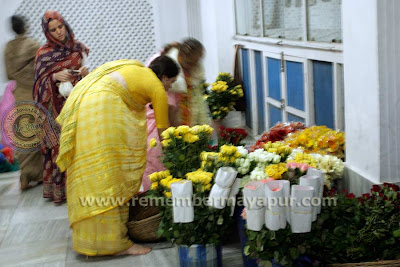 Madhumati Mataji is supervising this work.
For Radhastami she personaly sewed garlands for Radhika, meditating that the garland would match the outfit (in photo below is a fragment of that garland). 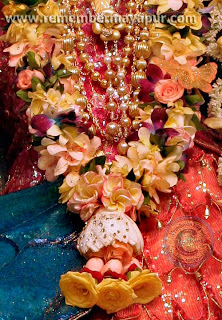 by Praghosa Prabhu, the chair-man of GBCom (GBC commity for Mayapur)

Sesa prabhu made a very impressive contribution during the GBC meeting at New Vrindavan last June. In essence he expressed how swings and roundabouts are the arrangement of the supreme Lord.

He made the point that:

- Most of the child abuse took place in India, yet the US yatra was sued and had to take the brunt of raising the majority of the settlement figure. Still they accepted that graciously and also greatly appreciated the co-operation they received from International ISKCON.

In the same way, why can we not unite around the request (for the facility of retirement for Srila Prabhupada disciples and elder Grihastha couples, who served in ISKCON for many years), that a suitable arrangement be made for the maintenance of senior vaisnavas, those who have served Srila Prabhupada's ISKCON for decades?

In short ISKCON should both support and underwrite the maintenance of it's senior and long serving devotees. That responsibility should not be the exclusive concern of ISKCON Mayapur but at the same time ISKCON Mayapur should be enthusiastic to help as much as they can. We cannot change the fact that Mayapur is the holy dhama, that Mayapur probably has more land than any other ISKCON centre in the world, that Mayapur has more buildings and facilities than any other ISKCON centre. This being the case it is somewhat natural that Mayapur will take the greater proportion of responsibility for making the transcendental 'old vaisnava home' a reality, again these swings and roundabouts are the arrangement of the Lord.

Thus this should be a transcendental labour of love and ISKCON Mayapur will receive both financial support for it as well as receiving the blessings and praise of the worldwide vaisnava community.

Just as some devotees are eager to help financially to establish a library in Mayapur, I am sure if we announce that we want to establish a facility for elderly members, much support will be forthcoming. Of course we need to be enthusiastic and united in our efforts, that will inspire the worldwide devotee community.

I just want to personally thank you and all the other devotees
involved in staging Srila Prabhupada's Vyasapuja for making such a
wonderful two days of offerings. I had so many devotees come to me to say
thanks. Some of them said it was the best Vyasapuja they have ever been
too. This is all due to your sincerity and determination to properly
glorify His Divine Grace.
Of course, things can always be improved (don't get puffed up!) but
we made a good start which I hope can be expanded upon each year. I am
sure Srila Prabhupada was very happy with all the presentations, the
Vyasapuja book (which I thought was exceptionally well done), the first
class prasadam, and the program today with invited guests from the local
area.
Once again, my humble thanks for making it a memorable couple of days.

Mayapur community Vyasa Puja book (hand-made by devotees) was offered to Srila Prabhupada on His Appearance Day, 5-09-07 in ISKCON Mayapur.

The book contains 201 touchy and intimate offerings of glorification and expressions of gratitude to Srila Prabhupada from devotees of ISKCON Mayapur Chandrodaya community. This is trully collective effort to glorify our Founder-acharya A.C.Bhaktivedants Swami Prabhupada.

Also, yet another temple design (improved upon previous one, offered in February) had been offered to Srila Prabhupada on His Vyasa Puja Day: 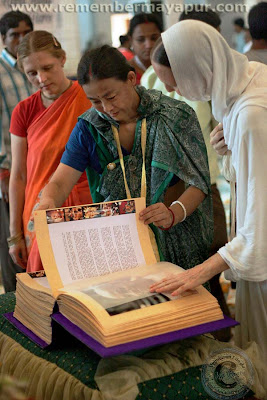 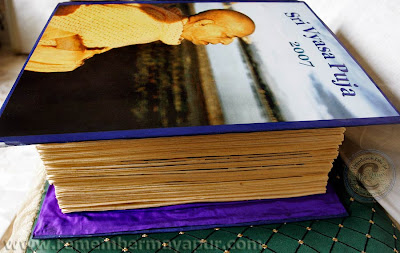 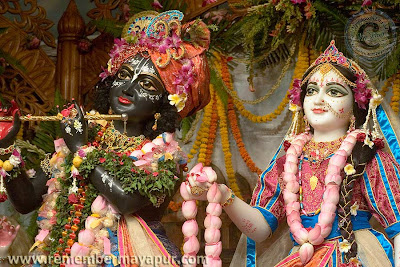 We just celebrated Janmastami and Srila Prabhupada Vyasa Puja.
Both are very big events and devotees worked around the clock to arrange the festivals.

I will start sorting pictures and posting them over next few days.

Here is a slide show of Radha-Krishna pictures with song "My Sweet Lord" by George Harrison: