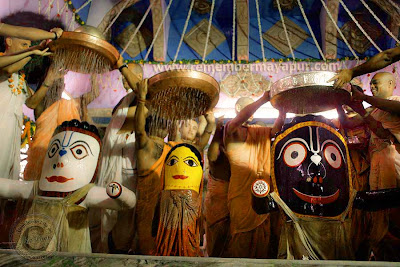 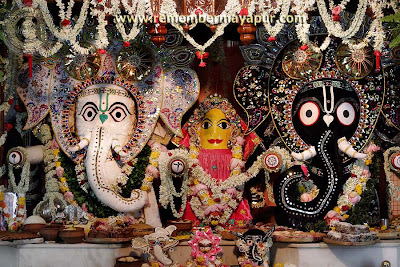 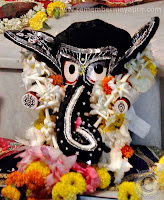 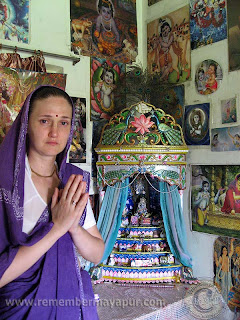 It is one thing to hear about someone, this doesn’t give a deep feeling, but when you actually involved personally and taking responsibility for a person – it is similar to becoming a mother. I feel so grown up after this experience - so much more appreciation of life and of devotee association came from the experience of me helping Damodara Rati.

We met in Mayapur. We became friends and I came to know her life story. She was very successful in her material life - wealthy, respected, had husband and children, job that she liked.
At the age 58 she left home to live and serve in NY temple. When she became devotee of Krishna she immediately renounced her material situation, she took all her gold and diamond jewellery, put it in a box and gave to her spiritual master, not leaving anything for herself. Normally people of such age are not inclined to give up their possessions, accumulated in life-long struggle. They want to enjoy the fruits of life's work, but Damodara Rati fully dedicated herself to devotional service to Radha-Govinda. Devotees of New York temple were kind and supportive of her. She was very attached to her spiritual master, H.H. Romapada Swami.
But what she does next? At the age 63 she suddenly get up and giving up her nice situation moves to India, Mayapur – on the fresh start!
She told me “Krishna was calling me”. At first she went to Vrindavan, but her Guru insisted that she would live in Mayapur. So, she came to Mayapur. She came along, did not have anyone here who knew her. Gradually Mayapur devotees noticed her and started to like her seeing what a kind, generous and simple person she was. In time, by the mercy of devotees, she got a room and settled in lady’s ashram, she got service to the Deities – making necklaces. She also was painting many deities for various devotees.

When she started to feel sick, she went twice to Udipi in a clinic there, trying to take care of her health. But during her second visit it become clear that she is seriously sick, she was diagnosed with cancer.
Before she came to Mayapur Damodara Rati was serving to Radha-Govinda in New York for 12 years - so, when she became sick devotees from NY were helping financially and taking kin interest in her wellbeing. Romapada Swami was very concern about her.
She was always very aware of her real position as devotee of Krishna and in complete realisation that she is getting prepared to go meet Krishna regardless of the external circumstances. She was not trying to stretch her time, was not in a mood of trying to enjoy little longer in this body. She did experienced bodily suffering, but she was taking it very much in satva-guna, there was no agony, she was quietly tolerating.

She always was saying that she wants to get married to Krishna. We used to laugh and joke with her about it, me and other matajis were teasing her a little. But she was very determent in her desire and very open about it.
Damodara Rati Devi Dasi left her physical body on 12 June 2008 at 8:30 am.

The morning she left we did the usual body-care procedures, and I saw that she was experiencing a lot of difficulties with her body, intoxication started, she had bad headache. But in all that she remain fully conscious, she did not show any symptoms of mental distress, but quite the opposite – rather calm and ready to meet with Krishna.
As we were trying to take care of her body, we heard a marriage party going by, on the road with a band (trumpet players, drums, dressed up people…)
Apparently, as we found out later, it was the most auspicious day to get married and several Bengali weddings were going on that day.
I said to her in a joking manor, “Oh! Get ready bride! Krishna sent for you to bring you to the wedding!” She looked at me with a serious and at the same time tricky expression and moved her head slightly in agreement.

I started to clean her room and when I was near her bed I touched her hand and understanding that something was wrong checked the pulse – she did not have it. She was still in her body, just about.
I started to run around trying to call someone, but everyone was at the program in the temple. I felt great pressure of responsibility. I run home to tell my husband that Damodara Rati is leaving her body NOW!(my husband, Shrisha Das, had a big part in helping and arranging for the care of Damodara Rati)
Then I run back again to her room, grabbed harmonium, one devotee happened by, Govinda Data, we started to sing Hare Krishna kirtan - because this was the most important thing to do for her at that moment. And as we sang both of us saw that she is leaving her body. This was 8:30 am.
Half an hour before she left Pankanjanghri Prabhu offered puja to Nrisimha Deva on her name.

It was a very beautiful day – clear, calm, sunny, yet not hot, nice rain came for a while and made everything clean and fresh just before we went to the Ganga in a procession to cremate her body.
Avyachi Mataji told me that on our way to Ganga she had a feeling like if it was a Queen’s procession, people were bowing on the road, everyone was offering respect – as if we were carrying a Queen.

Damodara Rati was so fixed on the idea that she is going to marry Krishna, for her this was not a question – she was definitely to marry Krishna. She was so very straight and honestly simple about it. We used to laugh (in a good way) when she was talking about her upcoming marriage with Krishna, but when we were carrying her to the cremation place we all felt like we were carrying a Queen.

Vakresvari Mataji arranged Harinama party to come with us, the whole cremation experience was very peaceful and beautiful, devotee stayed to the end singing kirtan.
Many people had tears running down. I was looking and thinking, “why are people crying?” – obviously not because she left this suffering body, everyone was very happy for her. I personally realised that I have lost someone very close, dear to me, a very important person in my life - even though I was not appreciating her importance enough while she was present. But by looking after her in her last days and especially having seeing how she left her body I had so many realisations in my heart.

Damodara Rati did not want to cause difficulties for anyone. I was worrying – what it would be like to care and cremate her when rains and flood will come, how would I combine this with my other service? I was considering to move her into my house. But she was so sensitive and graceful that she simply freed everybody of anxiety.

I am sure 200% that she is with Krishna now. We were talking with Jananivasa Prabhu today, and apparently yesterday (12-06-08) was the best of the best of days for performing marriage rights, many Bengali couples were getting married on that day, and Jananivasa Prabhu said “she is probably got married to Krishna too”. 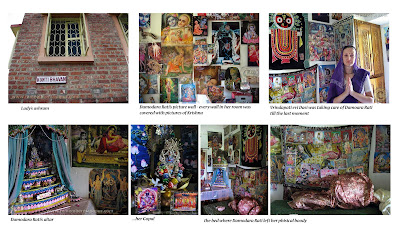 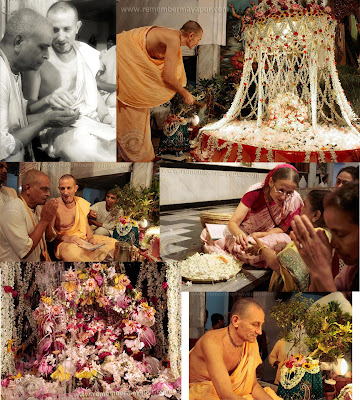 This is a popular summer festival when Radha-Madhava enjoy water pastimes in a pool with fauntine full of lotus flowers. The flower altar is set right in the water with fauntine placed infront of Radha-Krishna. Devotees are coming and offering flowers while chanting Their Names.
Jananivasa Prabhu and Ramaniya Mataji are giving out flowers to each person along with one of the names of Radha and Krishna to chant when offering a flower.
Posted by Padmalocan Das (ACBSP-1971) No comments:

This video is showing the cooking process in the Gada kitchen of ISKCON Myapur.
It is very large operation - devotees are expertly handling it, cooking daily for 3000 to 5000 people, who are visiting Mayapur.
Buses of pilgrims are coming through, people stay for a day or two for darsan, most of them eat in Gada prasadam hall.