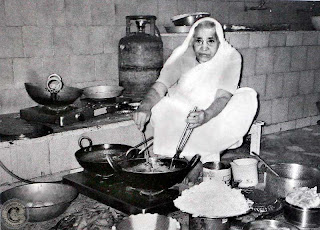 
Report by Yashoda Saci Devi Dasi
At approximately 7:28 in the evening, Friday, April 28th, 2006, Radharani Devi Dasi, affectionately known as “Didima” to all the Mayapur devotees, left her body. She left while in the loving company of vaishnavas and her caregivers while hearing Srila Prabhupada chanting Hare Krsna.
The next morning, Saturday April 29th, at 6:00, devotees began to converge to her room to offer their final respects to this honorable vaisnavi. I can honestly say that I had never seen Didima so beautiful, especially in comparison to how I saw her last a few hours before. Gone were any traces of pain or suffering. Her body looked pristine in a new white sari draped modestly in local Bengali style, and devotees had covered her petite body with many fragrant MahaGarlands.
Devotees offered flowers and garlands to her feet, then took the dust from them with reverence upon their heads. A kirtan group came inside the building and sang sweetly, beginning with Srila Prabhupada’s Pranam mantras, which is very appropriate since Didima, (who took diksa from Gaudiya Matha), took shelter of Srila Prabhupada as her siksa guru, and served Srila Prabhupada’s Mayapur ISKCON for at least 30 years. Ramadevi Mataji finished arranging Didima’s body for her last trip to the Ganga, and then the prabhus carefully took her outside, where many devotees had gathered for the procession.
In the procession first came water and fire-carriers, followed by Didima’s covered body on the padded palanquin, next came the ecstatic kirtan group and in the rear were the many assembled devotees. The procession leaving the Senior Ladies Ashram took Didima around the front of the temple property, to Srila Prabhupada’s Bhajan kutir, where Their Lordships Sri Sri Gaura Nitai took note of our ceremony and blessed us with their all-auspicious darshan. The time was Their Darshan Aarti time, so a pujari was fanning Them with a chamara whisk as we passed.
Next, the procession continued with a parikrama of Srila Prabhuapada’s Samadhi. Then we took Didima to the Prabhupada Ghat. The matajis carefully took charge of preparing Didima’s body for cremation by smearing her with ghee, then re-dressing her in another pure white sari. At the same time, prabhus were skillfully arranging the fire by first digging a shallow pit to enable her body to burn fully with the help of air circulation, and then deftly they arranged fire-wood on top. After the matajis finished preparing Didima’s body for this last samskara, the prabhus placed her on top of the pyre, and a few brahmacharis arranged for the lighting of the fire, a service traditionally preformed by the eldest son. Sadly, it seems that Didima’s son Haridas das was unable to come to participate in the ceremony, so the devotees took care of all the final details.
After the burning started, most devotees took their bath in the Ganga. Dayarama prabhu took this time to change his sacred thread, which is traditionally done by the sons after their mother leaves the body. Hari Sauri Prabhu, although scheduled to give the morning’s Srimad Bhagavatam class, paid his respects to Didima by being at the ceremony. Actually I saw that everyone was sincerely mourning her loss, helping during her illness, and participating during her cremation as they would for their own mother or grand-mother. The entire ceremony was performed in a celebratory mood, with beautiful kirtan the whole time but quite a few eyes were moist with tears, especially from the ladies, as they remembered their beloved Didima. I felt deeply touched to see how nicely the devotees took care of Didima with such love and respect.
Radharani Devi Dasi, Didima, will be missed by all of the Mayapur Devotees who were blessed to know her. Srila Prabhupada, who gave Mataji shelter and seva, in Mayapur Dham, is surely pleased with her.
Radharani Devi Dasi ki Jaya!

From Isani
It is nice to remember Didima, sitting on her bench in the Long building chanting and looking to the park and all that's happening.
I remember the young brahmacari boys sitting with her, telling what's in their heart, and joking with her. She was the only Mataji who they were allowed to associate with.

Thank you Didima for the person you were and all the nice association you gave me.
When I got up and started the computer, I was surprised to see that you had sent me already the nice video about Didi Ma leaving her body. It touched me very much, that I could see her.
She, like Jayapataka Maharaj said, was like our mother, always caring and inquiring how we were doing.

From H.H. Jayapataka Swami
Didima was a very dear devotee. She was Srila Prabhupada's personal cook.
Once Srila Prabhupada said three Mayapur Mataji's, of which Didima was one, were the best cooks in ISKCON. She did her devotional service with dedication for all these years. When her health interfered with her service her desire to remain in this world seemed to be reduced. She was always talking about devotees, her devotional service and transcendental topics.
She was very kind to me and I will miss her very much. She leaves behind her son [Budo] Haridas who does the media TV shows in Mumbai. I don't know how many other children she has. We are all like her children. She would take care of us and feed Radha-Madhava and we would get the remnants.

All glories to Didi Ma!