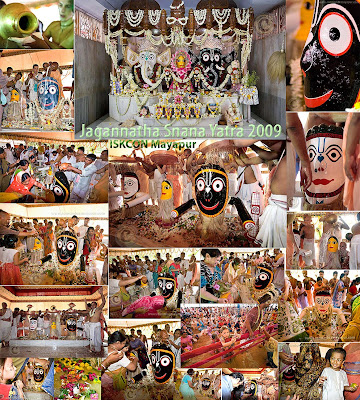 Lord of Universe, Jagannatha, along with His brother Balarama and sister Subhadra are bathed by devotees 2 weeks before Ratha-yatra parade. On this ocasion not only priests, but lituraly EVERYONE is allowed to bathe and touch the Lord. It is once a year ocasion.
Snana yatra - bathing of Lord Jagannatha. The story is that the deity is bathed (on this ocasion everyone is allowed to come and bathe, touch the deity, normally only priests can do it).
Then Lord "catches cold" after so much bathing and goes to bed for 2 weks, when He is given a special medicine to get better, it made of mixed curd, cream, candy and butter with cinamon.
After He gets better we will have even a bigger festival, Ratha-yatra, Lord Jagannatha will go out of His temple (once a year ocasion) in a big cart with large wooden wheels pulled by people. He goes around streets and everyone can come and offer service to the Lord, even people who normally don't go to the temple, animals, etc - all are given darsan and mercy of the Lord on that day. 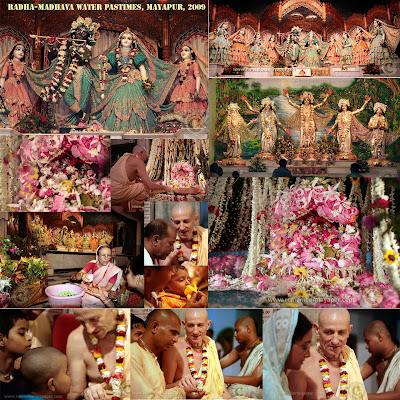 Water pastimes of Their Lordships Sri Sri Radha-Madhava is one of the summer festivals - Small Radha-Madhava deities are placed in a lotus fauntain - it is in the shape of a lotus and also filled with pink lotus flowers, infront of Radha-Madhava is a small fauntain and Their altar is surrounded by water.
Devotees come and offer flowers to Their Lordships chanting Their names, Jananivasa Prabhu and Ramaniya Mataji giving out flowers along with one of 1000 names of Radha-Krishna to chant.

Chandan YAtra is a time of a year when Deities covered with Sandal wood paste (chandan) to keep cool in summer's heat. For 21 days of Chandan yatra devotees were offering a different lila-outfit every day to Sri Sri Radha-Madhava. 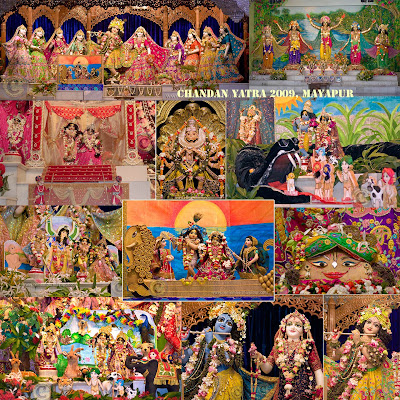