One of the conditions was that we had to have an internal access road of a certain width. And it just so happened that right where the access road was supposed to go, there were some palm trees. Once, when Srila Prabhupada came to Juhu after being away for some time, he noticed that one or two of the trees had been cut down, and he was very concerned-I would even say upset.
He asked, "Why did you cut down the trees?" We thought we had the perfect answer: we had to build the temple, and to get the permission for the temple we had to cut the trees in the way of the road. Srila Prabhupada said, "No, you go to the municipality and tell them it's against our religion to cut down trees." So we had no choice, and we did it. And of course the municipal officers objected.

But one thing that really struck me about how concerned Srila Prabhupada was for the trees was that the next time he came back to Juhu after a world tour, practically the first thing he said was, "I was in Tehran, and I have seen they have trees in the middle of the streets. So we can also have trees in the middle of our street." So on Srila Prabhupada's order, we held our ground with the municipality, and in the end they gave us the permission to keep the tree. And even today you can see that tree, which Srila Prabhupada protected, still standing there with asphalt all around it.

So I am thinking that if Srila Prabhupada has so much concern and care - and even love, I would say - for a tree, then how much care and love he must have for us. And it's just because of Srila Prabhupada's care and mercy and protection that we are able to stand in Krsna consciousness--no matter what else is around us. 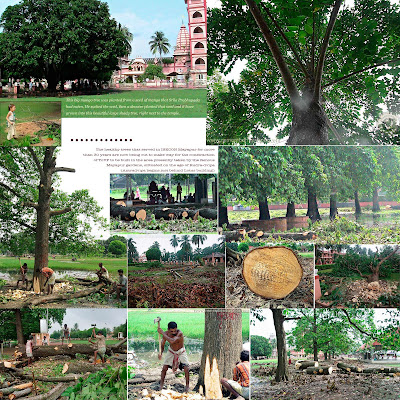 Yesterday Mayapur Project started to clear up grounds for the Temple of Vedic Planetarium to be built in the area presently taken by the famous Mayapur gardens, situated on the age of Rudra-dvipa (Antradvipa begins just behind Lotus building).
Big Kadamba trees are getting chopped down, nearly 100 trees have been sentenced to die for the greater good.
Posted by Padmalocan Das (ACBSP-1971) 3 comments:

On Monday 21st September, Mayapur was swayed by an earthquake that was centered just inside the border of Bhutan, where it registered as 6.1 on the richter scale.
http://news.bbc.co.uk/2/hi/south_asia/8267067.stm
I was sitting for a few minutes and at exactly 2.30 pm I felt the whole building swaying gently. The chimes above my head began to ring, and I saw the water in a 12 liter bottle on the concrete floor moving from side to side.
It was the first time I ever actually felt an earthquake. I had experienced one once in Los Angeles, but it was only for a split second, and I heard it rather than felt it.
Very few devotees in Mayapur even noticed it. If you were moving about you could not tell. My neighbor Madan Mohan (originally from Canada) confirmed that he also felt it while sitting at his computer.
It would be interesting to know what time exactly it struck in Bhutan. There apparently it was only for a moment, but in Mayapur it appeared to last for about 30 seconds, albeit just a gentle swaying. 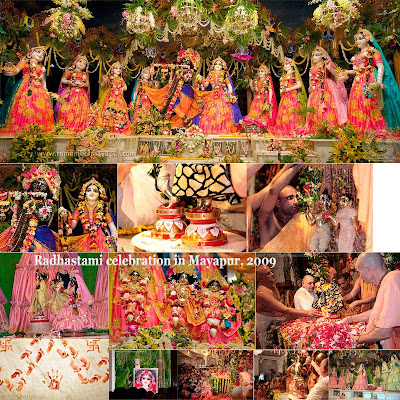 Here is a video of mangala-aroti after Radhastami: