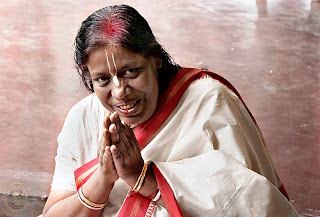 Haribol! I read this about Sachimata Mataji and I was wondering if she is the same Sachimata who was in the Calcutta temple in 1973. If so, does she remember Saradiya dasi? I'd like to offer her my humble obeisances and am glad to read about her love for Srila Prabhupada and the Holy Names. Hare Krsna! www.saradiya.com

yes, Mataji, this is the same Sachimata. I will tell her what you said when I meat her (which isn't often).
I looked at your website - very beautifully done!